The island of Procida, capital of culture 2022. What is the perfect tour?

The island is part of the Campania archipelago, together with the nearby island of Ischia and Capri. A concentrate of colors in harmony, the island has been awarded the 2022 capital of culture.

The attractions of the island of Procida: which are the ones not to be missed.

If you are thinking of visiting Procida among your travel destinations, here is a guide for you on what to do and see in this small island with many opportunities. It is possible to visit the island in 2 or 3 days but for those who prefer, even one day will be enough to visit it all. We have selected the best places for you, so that you can enjoy the island to the fullest. The island of Procida awaits you.

What are the places not to be missed? What is the best way to visit it? Read and find out more about this wonderful island rich in culture, history and traditions.

The island will welcome you right away, when from the ferry you will notice all the colorful houses, a colorful set of colors will stand out in your eyes, it will be love at first sight. In fact, the island has three possible berths. Know that this is an island that has not always been touristy as you see it today, in fact, it was mostly inhabited by fishermen and families of seafarers embarked on ships often in very distant seas.

It is the pier where all those who arrive with their own boat can stop and stop even for a short time, but it is also the main docking for ferries and hydrofoils and for all those who intend to reach the island of Procida from the nearby island. of Ischia, Capri, Naples or Pozzuoli. Once you have landed there, you absolutely cannot fail to taste the famous "tongues of Procida", a puff pastry cake with lemon cream inside, a real delight.

How to reach Marina di Procida:

The streets of the village of Procida.

It represents the oldest and most colorful village of Procida, it dates back to the seventeenth century and is a set of arches, domes, windows, stairs and facades of a thousand colors. Whenever you search for Procida online, this image will appear. Know that it is there that the most particular restaurants are located and it is there that some scenes of the film Il Postino with Massimo Troisi were also shot. It is a fishing village, where while walking you will be captured by the nets that the local fishermen leave there to dry and it is from there that the “paranze”, the typical boats of local fishermen, depart.

It can be reached either from the sea with your own boat or from land by going down the stairs to the Pennino, from via San Rocco or from the Gratinata Scura from Via M. Scotti. From there we arrive at the Sanctuary of Maria delle Grazie, to which a very special feast is dedicated every year, in which the "graziella" is chosen, a girl chosen among the most beautiful of the place. 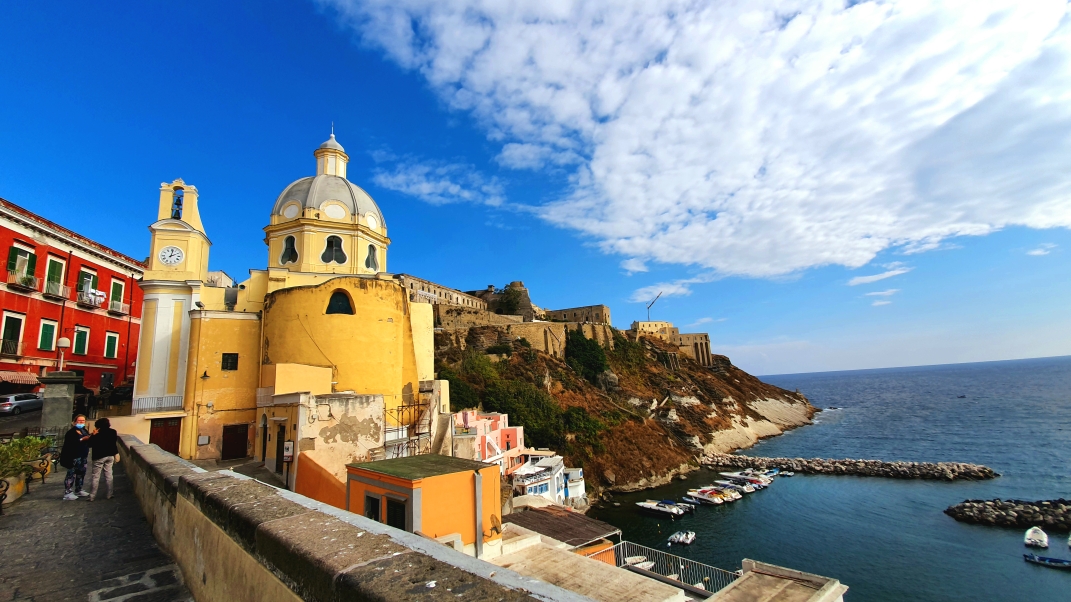 It is one of the most popular ports to reach Procida with your own boat, from here the various alleys and streets and the various cafes that overlook the sea wind. Walking along the village you will be fascinated by the centenary houses and the spontaneous architecture. One of the most characteristic places is represented by the Sanctuary of San Giuseppe dating back to 1836 and recently restored.

The ancient fishermen's port can be reached thanks to the bus lines L.1 and L.2 which depart from Marina Grande and cross the entire main road; or even with your own boat from the sea.

The islet of Vivara

A marine protected area belonging to the Kingdom of Neptune, a place preserved by WWF. From the terrace of our apartments you can see first of all Vivara, behind Procida and finally on the clearest days also the gulf of Naples with Vesuvius.

How to reach Vivara:

A beautiful walk is connected to Procida by a bridge that will allow you to see the nearby island of Ischia from afar.

The Exclusivehomeischia terrace from which you can admire the islet of Vivara and the nearby Procida.

A beating heart and an ancient history, the Terra Murata prison has seen the passage of many who have been isolated for a long time on this island. A space about 90m high above sea level. Its name derives from the walls that support and protect it. Its history dates back to the 1500s, it was in fact built in the Middle Ages with the aim of protecting the local population from enemy attacks.

How to reach Terra Murata:

It is possible to reach this place either on foot or by bus, along the road you will not visit the Abbey of San Michele Arcangelo, patron saint of the island.

The cacere of Terra Murata, the port of Corricella dal Mare.

CHOOSE THE RIGHT APARTMENT FOR YOU. 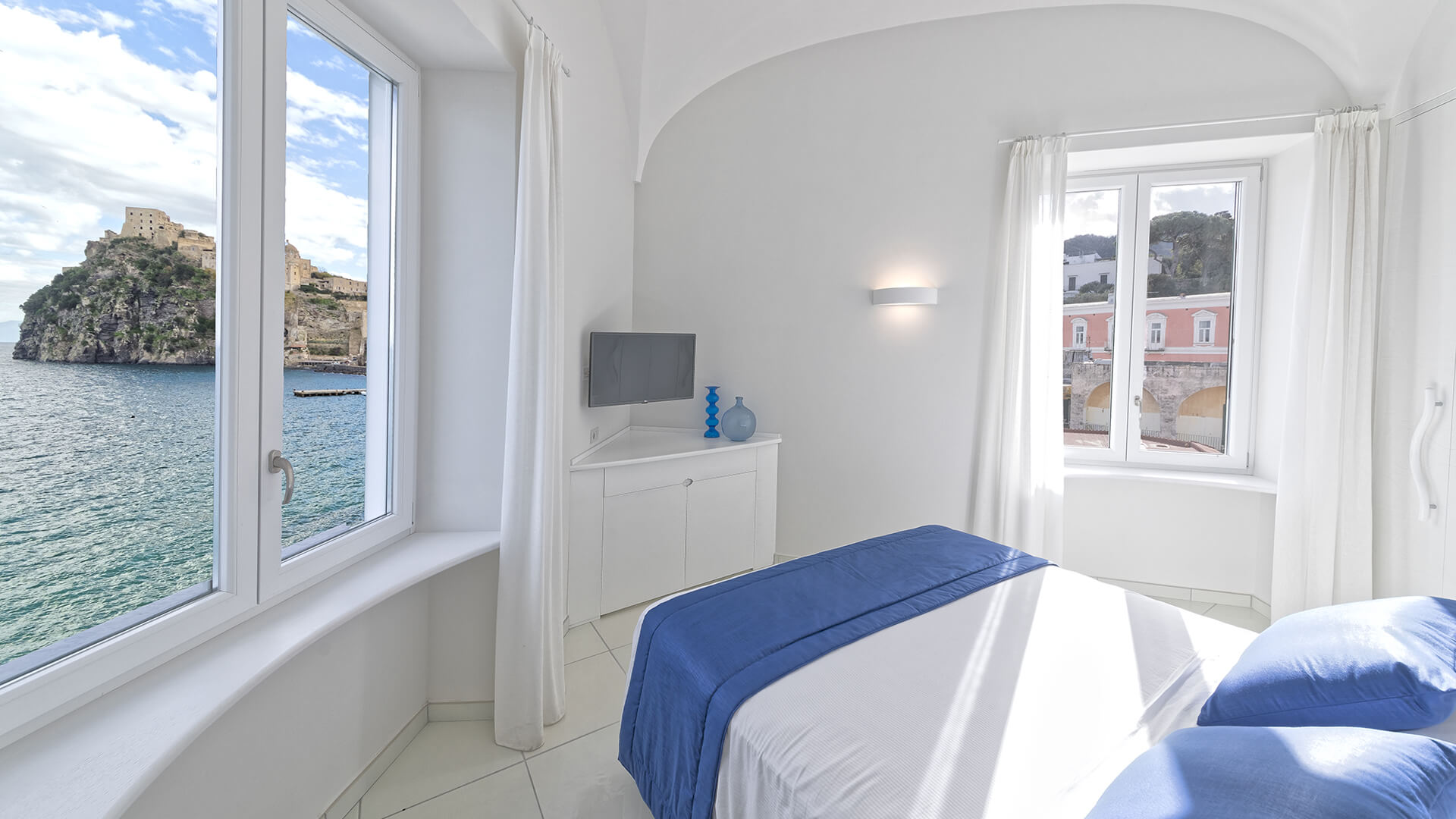 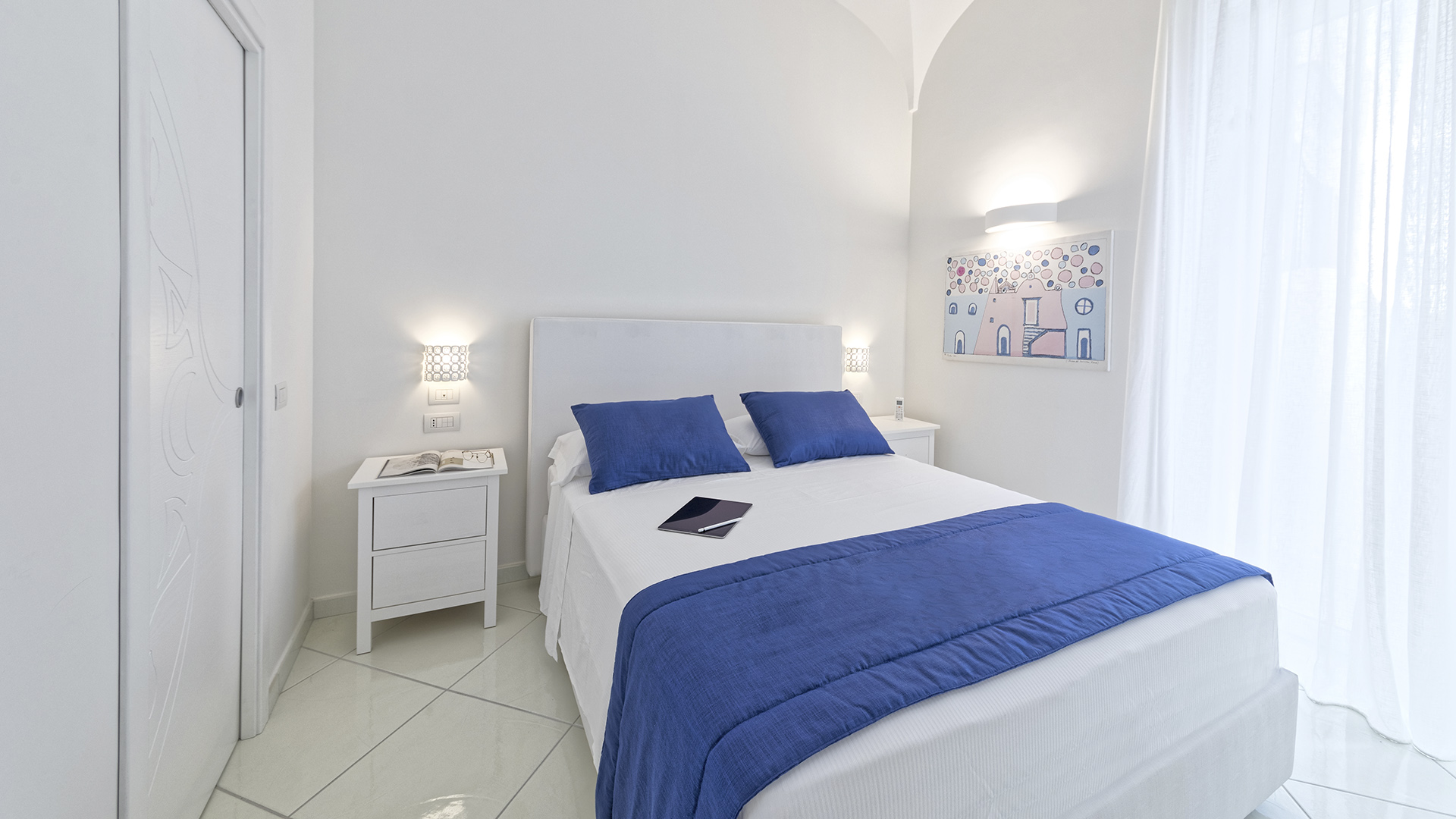